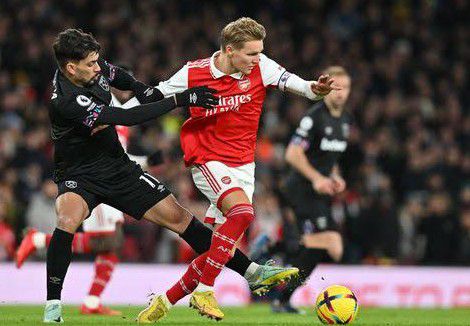 Arsenal dominating the ball with 72 per cent of possession, generating six shots to three. But only one of those attempts has hit the target for the hosts, compared to two for West Ham – who lead by a goal to nil. Two corners apiece, nine fouls from the Hammers to five.

A tale of two penalty calls. West Ham won their spot-kick after Saliba was adjudged to have taken Bowen down inches inside his own area, and Benrahma did the rest.

Vladimir Coufal is into the book for a meaty follow-through on Gabriel Martinelli.

The Brazil winger’s delivery is excellent from the free-kick, it glances off a West Ham defender but Eddie Nketiah is a little too flat-footed to capitalise. There will be three minutes of injury time.

Arsenal have responded by once again hogging possession, but this will be a real test of their cutting edge without the injured Gabriel Jesus.

After lots of Arsenal pressure, Odegaard’s shot hit Cresswell to win a penalty for the home team but VAR quickly sent Michael Oliver to the screen to overturn his error.

Arsenal on top as the half-time break approaches. Martinelli dances down to the byline and wins a corner…

It might take a bit of magic for Arsenal and here’s Thomas Partey, spearing a shot from more than 25 yards.

It might not be going in but Lukasz Fabianski can’t take any chances and turns behind. The West Ham goalkeeper is fouled from Bukayo Saka’s in-swinging corner.

Check out the latest West Ham highlights and goals here

Jack Whilshere Jokes Kane Poor Tottenham Form Doesn’t Concern Him – ‘I’m An Arsenal Fan!’ But Regards Him As One Of The Best Striker