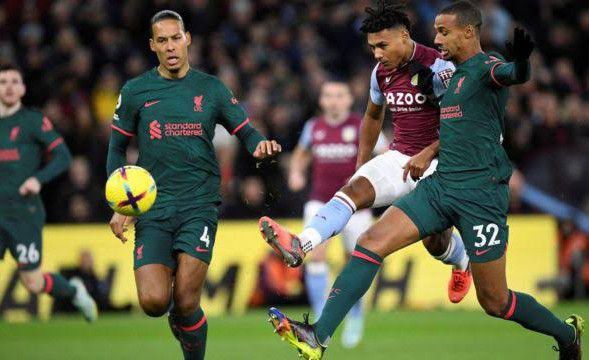 Robertson’s precise cross is headed over by Nunez, though he was again offside. It wasn’t a great attempt mind you.

Salah wins a corner on the right. Robertson’s deep inswinger is headed away bravely by Konsa, a split-second before he is clattered by Van Dijk.

Matip has a goal disallowed! Robertson’s free-kick was headed authoritatively past Olsen by Matip, but the flag went up straight away and replays confirmed he was offside.

Robertson stays down after Douglas Luiz stands on his achilles. I’m pretty sure it was accidental, but it was still a nasty challenge. Robertson eventually gets to his feet.

McGinn, on the right, curls a booming, inswinging cross towards Watkins at the far post. He stoops towards the ball but heads it into the ground and straight at Alisson.

At the other end, Nunez misses a great chance, though he was offside so it wouldn’t have counted.

Douglas Luiz makes a driving run down the inside right and seemingly gets clipped by a Thiago Alcantara tackle.

The referee lets play go on and Liverpool get caught trying to play out from the back.

Lucas Digne goes down inside the box after a tackle from Trent Alexander-Arnold but the Reds manage to clear their lines after the penalty shout is waved away.

Liverpool’s clearance sees them boot the ball up the pitch and get Darwin Nunez in behind Ezri Konsa. Nunez watches the ball come over his own head and meets it on the volley.

The striker goes for goal but his effort is too soft and Robin Olsen gets safely in behind the ball.

Check out the latest Aston Villa highlights and goals here