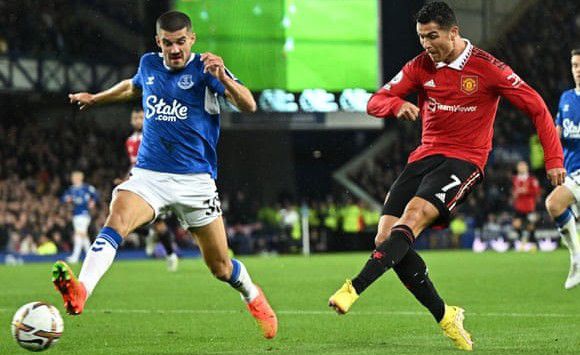 Everton vs Manchester United’s match started with full attacking forces.  Cristiano Ronaldo finally scored his 700th club goals. It took him 943 games but there it is.

Casemiro wins the ball inside the United half and releases Ronaldo down the wing.

The Portugal legend slots comfortably past Pickford in the resulting one-on one.

Man United have moved the ball forwards nicely so far in this half.

Ronaldo looks to slide in Antony, but the ball squirts away from him and through to Pickford. In general, Manchester United have far more control in possession.

Considering they have Eriksen and Fernandes, among others, that’s probably only to be expected. It’s a tough assignment for Iwobi, whom Lampard is trying to convert into a central midfielder.

Everton are a bit sloppy in possession and struggle to hang on to the ball.

Eriksen sprays a ball out to Antony on the United right, who cuts it back for Casemiro to cross first-time. Ronaldo leaps at the far post to head it but he can’t get over the ball and it balloons out for a goal kick.

Fernandes, who was behind him, looks aghast, apparently believing he was in a better position to apply a finish than in his compatriot. But it looked like it was offside anyway.

Gray digs out a decent cross from the Everton left, intended for Maupay, but he can’t get on the end of it.

Another ball is pumped into the Manchester United penalty area by Onana and Iwobi meets it with a header but United clear their lines.

Check out the latest Everton highlights and goals here

UEFA Champions League: Round 16 draw… Liverpool vs Bayern, Man U vs PSG