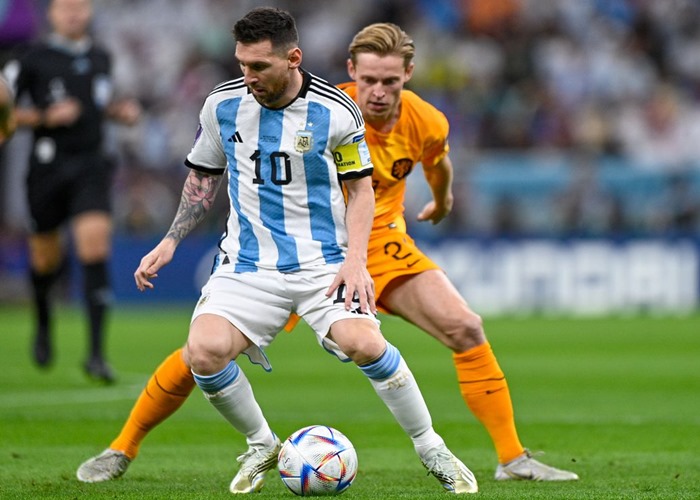 14 yellow booked in the game, 9 yellow for Argentina including and 5 yellow cards for Netherlands.

German Pezzella and Nicolas Tagliafico replace Cristian Romero and Marcos Acuna. The Netherlands bring on Wout Weghorst for Memphis Depay, who had a minor stinker.

The Dutch cognoscenti will be loving this – Van Gaal now has two big lumps up front.

Gakpo goes over in the area after a clumsy tackle, I think from Romero. That looked like a decent shout for a penalyt, though nobody really appealed.

The Netherlands will need a minor miracle to turn this around. They have offered nothing in the second half as the game has turned into something of a stroll for Argentina.

Lisandro Martinez and Depay have been booked. Apparently there’s a protester on the field, though the cameras aren’t showing it.

Messi smashes a spectacular free-kick just over the bar. It flashed across Noppert, who wouldn’t have saved it, and brushed the top of the net.

Messi is shoved over just outside the area by van Dijk. The free-kick is 22 yards out, slightly to the left of centre, which makes it perfect for a right-footer. Arf.

Argentina are in total control of this game. I suppose you could have said the same about Brazil before they were stung by Croatia, but even so, the Netherlands have been so disappointing going forward.

The Netherlands are having all of the ball now, though it’s Argentina who are controlling the game. Their defence looks very comfortable.

Check out the latest Netherlands highlights and goals here

Check out the latest Argentina highlights and goals here