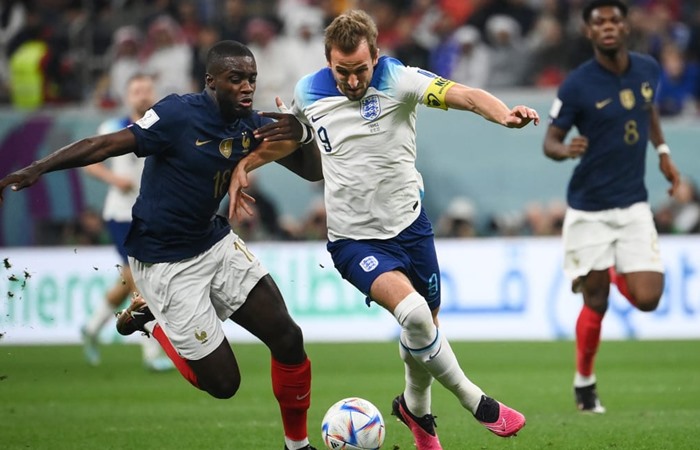 There were some damning replays there and the referee agrees. A clear barge in the back of Mount by Hernandez.

Harry Kane will have a second chance to draw them level. Hernandez gets booked.

Theo Hernandez clattered into substitute Mason Mount with a reckless and downright stupid shoulder bardge inside the box and after a pitch-side VAR check, the referee has given England a second penalty!

England do make that change – Henderson has gone off and one comes Mason Mount.Saka has also gone off for Raheem Sterling.

France have also made a change – Ousmane Dembele off and Kingsley Coman on.

Two minutes after seeing an effort superbly saved by Jordan Pickford, Olivier Giroud heads France back into the lead!

Antoine Griezmann whipped in a brilliant ball and Giroud’s header flicked off Harry Maguire on its way in.

If they want to reach the semi-finals, England will have to do it the hard way…

Griezmann out there on the left side and he delivers a superb cross that Giroud gets onto to with the head just a fraction ahead of Harry Maguire and it is thundered into the net. No stopping that.

Harry Kane goes down just on the line of the penalty area, but after a lengthy VAR check, Brazilian referee Wilton Sampaio waves play on.

There was also an alleged foul in the build-up to France’s goal which wasn’t reviewed by the on-field official.

Check out the latest England highlights and goals here

Check out the latest France highlights and goals here

Guardiola Reacts to Petition to Ban Haaland From English football