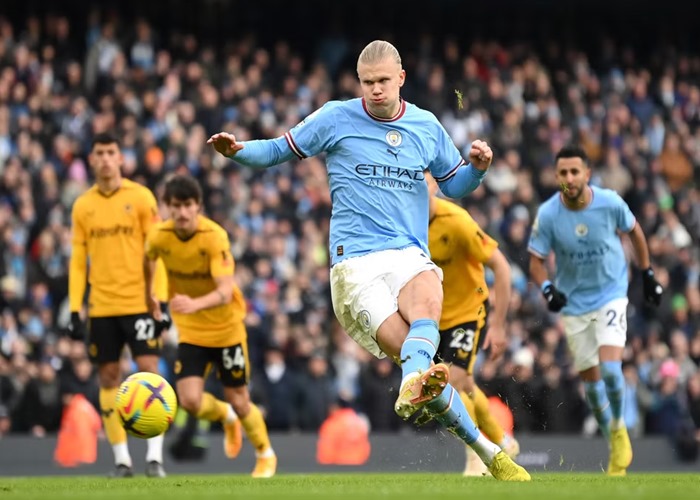 De Bruyne leads the charge of another City counter-attack, pushing his way through the middle before threading it into Alvarez. He does well to hold off Kilman long enough to get the shot away, and Sa blocks it with his trailing leg.

Haaland grabs his hat-trick!!! Man City catch Wolves with a high press and the Norwegian sends Sa the wrong way.

Easy as you like from Erling Haaland, ready to take it almost before the whistle had gone, and that should be game, set, and match for City now. The priority has to be keeping a clean sheet to not let Wolves in with a sniff.

No player has scored more home goals in a single Premier League season for City than Haaland, who has 18 goals in his 11 appearances at the Etihad Stadium this term (two more than Sergio Aguero in 2011-12).

Three goals and that’s Erling Haaland’s afternoon over with City manager Pep Guardiola deciding to bring his star player off and wrap him in cotton wool.

World Cup winning striker, Julian Alvarez replaces him up top. Not a bad bench for City to call upon!

Wolves win a corner which Moutinho takes short to Podence before getting it back on the right. He has four to aim for in the middle but sees his cross blocked by Rodri.

Riyad Mahrez has just produced a delightful chipped finish and thinks he’s scored but his run is offside and the goal is disallowed.

Rico Lewis goes off for Nathan Ake, who slots in at centre-back and Aymeric Laporte goes into the centre alongside John Stones.

Manu Akanji is at right-back. Lewis hadn’t done anything particularly wrong, but Guariola did say City cannot play well without Ake, and in that first half there were a few occasions where Laporte didn’t offer support for Jack Grealish.

Wolves had a slim chance at half-time, now that hope has been single-handedly extinguished with Haaland scoring his fourth Premier League hattrick of the season. The visitors have a long 30 minutes to try and salvage some type of pride but City look hungry to make a statement.

Check out the latest Wolves highlights and goals here