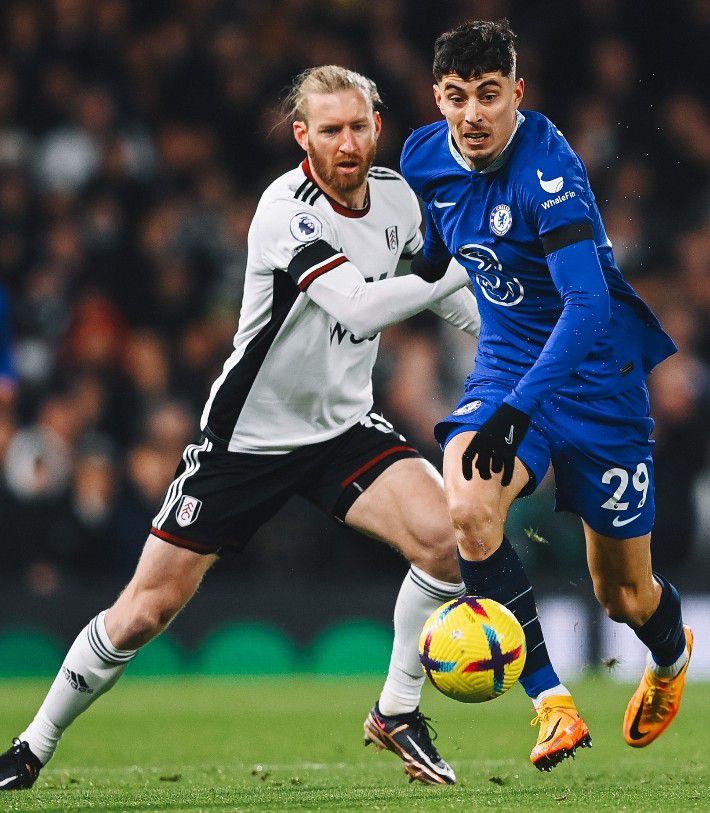 It’s a problem with his left leg, his knee I think, which he seemed to jar while kicking the ball away. He has his shirt over his face, and Jorginho is getting very detailed tactical instructions from Graham Potter.

Chance for Pereira… Robinson belts the ball down the left wing to find Pereira, who runs off Chalobah and shoots wide of the near post from a tight angle. It must have taken a deflection because Fulham have a corner.

Mount and Havertz combine to find Joao Felix, who whistles a first-time shot from about 25 yards.

It’s straight at Leno, who pats it down and grabs the ball at the second attempt.

It hasn’t always worked, but at times the front three of Joao Felix, Havertz and Mount have linked up really nicely.

Hall zig-zags superbly between Decordova-Reid and Tete before being brought down just outside the area on the left.

Tete’s deep cross is headed back across goal by Vinicius. Kepa almost makes a Horlicks of what looks a routine save, clawing the ball out in front of goal, but Thiago rescues him by booting it clear.

This isn’t news, but Fulham really are a terrific side. On paper their team doesn’t look that great, but they play with so much confidence and purpose in attack.

Havertz moves elegantly away from Robinson on the right. His cross is blocked at the near post by Ream, who then charges towards the loose ball to deflect Azpilicueta’s follow-up shot over the bar.

Check out the latest Fulham highlights and goals here

Pogba Set To Sign Another 5-Year Deal For Man Utd