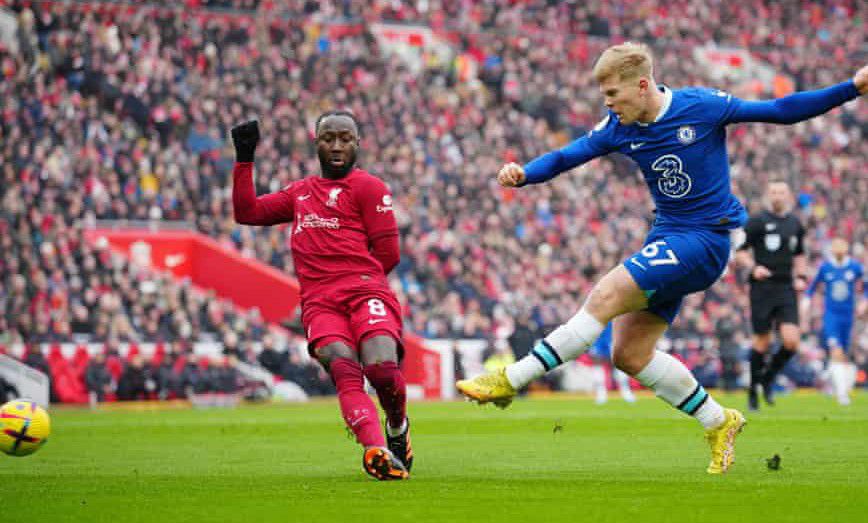 A long ball down the middle nearly releases Ziyech. Robertson gets in first, but blooters his backpass, forcing Alisson to slice a clearance into the Kop.

Ziyech takes the gift corner, but Alisson makes up for his part in the previous shambles by plucking confidently from the sky.

Liverpool starting to use their left flank far more effectively, and Elliott delivered a delicious cross that Thiago Silva almost glanced into his own net.

Chelsea win a very soft foul from the resulting corner, Jorginho going down under little contact.

He cuts inside and looks to send one of his trademark curlers into the top left, but gets it all wrong, and the ball sails harmlessly into the Anfield Road end.

Robertson found himself in a central position and broke behind the Chelsea midfield.

The Scot tried to play a one-two with Salah at the edge of the box but the return pass was deflected through to Kepa.

Kepa put to work! Salah air-kicks in the Chelsea box, but the ball’s worked back to Thiago, who bobbles a shot goalwards from the edge of the area.

The ball’s deflected, extracting what little sting the shot has, and the keeper smothers.

Chelsea tried to press high but they did not lock on in midfield and it was too easy for Liverpool to play through them.

Keita misplaced a pass though, to groans from the crowd. Gakpo is enough of a nuisance up against Cucurella to win a corner.