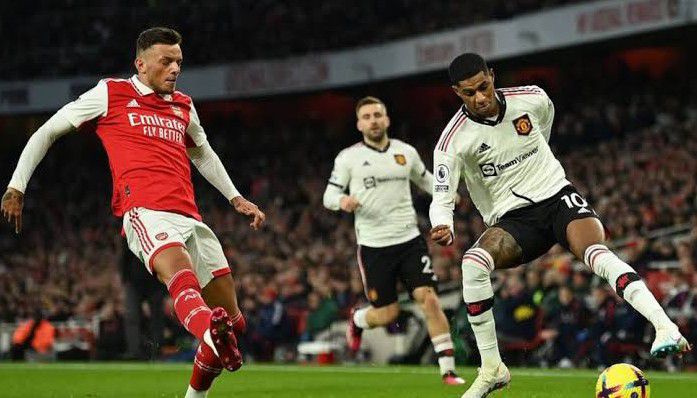 Eriksen just impatiently ordered Antony over to counter a possible short corner. Antony has been decent, overall, although it feels like United sense Arsenal’s right-hand side is the area to target as far as the wings go.

At the risk of the commentator’s curse, the game has settled in the last eight minutes or so after a pretty breathless first half hour.

Manchester United have been disciplined with their set-up and look a threat when they get into the final third.

Weghorst has been very good so far. He’s not had a sight of goal but he’s been involved a lot, his link-up play is good and when the ball is played into his feet he’s either keeping it or laying it off to a teammate, which is allowing United to get men forward.

This has been an outstanding match between two quality sides. The atmosphere is electric and player are responding under the floodlights. McTominay has just tested Ramsdale.

Man United brought that on themselves with needlessly trying to play out from their own third.

David De Gea is not a good enough ‘keeper to do it and Wan-Bissaka is not the right-back you want on the ball in those phases.

Nketiah’s eyes are lighting up like floodlights whenever the ball is with De Gea.

Rashford has denuded Partey there. He was still in a position of security to make amends for th sloppy pass but as soon as Rashford danced past him the gap was there and he nailed the strike.

Europa League: Round of 32 Draw As Arsenal, Chelsea Get Faces Easy Teams

Zinedine Zidane Might Be The Next Manchester United’s Manager