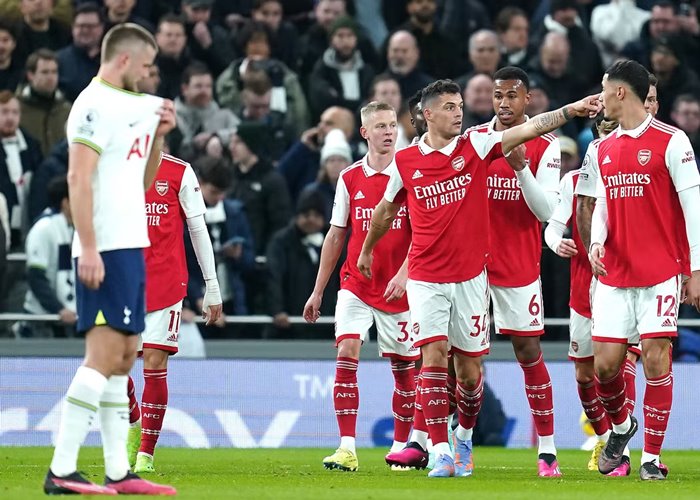 Arsenal claim the victory! They’ve beaten Tottenham away from home for the first time since 2014. The Gunners move eight points clear at the top of the Premier League.

Spurs continue to seek answers. They’re 14 points behind their rivals. Arsenal’s march towards the title goes on.

Martin Odegaard takes in the appreciation of the travelling Arsenal fans as he is replaced with a couple of stoppage time minutes to play.

Arsenal seem to have this game in the bag. It’s been another disappointing outing for Spurs.

The set pieces keep coming for Tottenham. Son is gifted the chance to shoot from another free kick – this one over on the left, just outside the box – but he smokes his low effort into the wall.

Kulusevski’s recycled ball comes into the box but Ramsdale commandingly plucks it out of the air.

t almost came down to the old pairing of Harry Kane and Son Heung-min. Kane is played down the right side of the pitch and gets into the box before pulling the ball back ot Son.

Son takes a touch and shoots but a slight deflection takes the ball over the crossbar and out for a corner.

What can Tottenham muster in these last 10 minutes? Son Heung-min swings a free kick into the middle of the box but Aaron Ramsdale is out quick and punches the ball clear.

Arsenal have another free kick, this one is one the edge of the ‘D’ with Martin Odegaard and Granit Xhaka both interested in it.

Odegaard jumps over the dead ball in a dummy before Xhaka smokes his shot high and wide.

Check out the latest Tottenham highlights and goals here