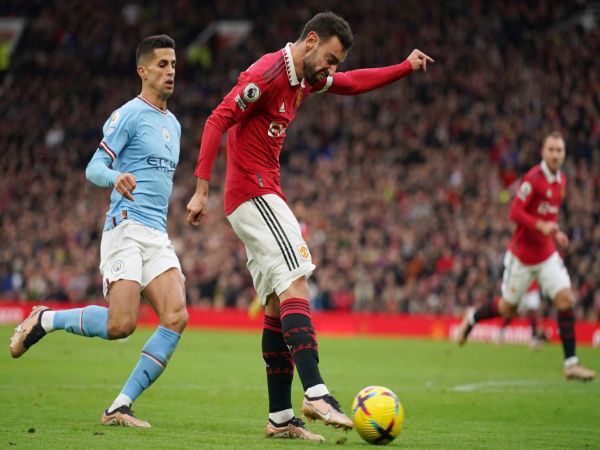 Just two touches of the football for Haaland at first half. Phil Foden has hardly been involved either – he’s just been caught offside.

Rashford is just inside his own half and decides to play a long diagonal for Fernandes who cannot control the ball in the wind.

The ball then breaks for City, De Bruyne then attacks down the middle before playing a ball on the right for Mahrez whose cross is dealt well with by the hosts.

Ten Hag spoke about shutting Rodri down pre-game by selecting Fred but the Brazilian has been right on De Bruyne’s case thus far.

A fine bit of harrying ends one move before a wayward Rodri pass ends City’s next.

Manchester United, however, gets bodies between the ball and the goal with Casemiro one of two players throwing themselves at the shot.

Ten Hag will doubtless be extremely happy with what he’s seeing from his team at the moment.

The camera spots Wout Weghorst in the stands, watching on with two of his daughters on his lap. The Burnley loanee was not signed in time to play today.

Not the frenzied start of previous Manchester derbies – that will more than suit United.

Both teams are well organised and, more often than not, there’s no obvious pass for the man with the ball.

Check out the latest Man City highlights and goals here