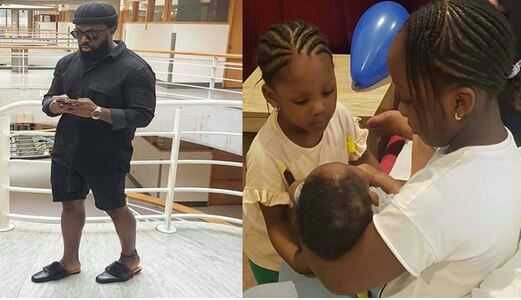 After gotten a bouncing baby boy from his second baby mama, The Egberi of Bayelsa Artist has announced that he doesn’t has interest in making babies again.

Bayelsa-born Dancehall singer, Timaya has disclosed that he is done making babies.

The singer who recently welcomed a son, Emmanuel by his second baby mama, shared this adorable photo of his daughters, Emma and Grace with their brother and wrote; ”Emma is now a big sis. Super blessed Dude I am, Hey I’m done making babies… Get to work PAPA!”.

His first babymama, Barbara gave birth to his daughters, Emma and Grace while his son was birth by his second baby mama, Tama, who is reported to be an Interior decorator in Abuja.

Timaya – Something Must Kill A Man