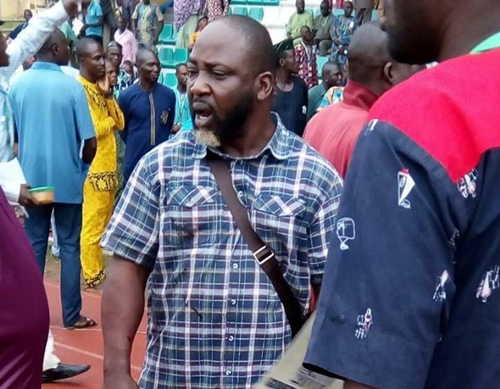 Things were going on smoothly, and delegates from about four local government areas, out of 16, had cast their votes for their preferred aspirants when, suddenly, violence broke out at the Oluyemi Kayode Stadium in Ado-Ekiti last Saturday.
And that was how the exercise to elect a governorship candidate for the All Progressives Congress (APC) in Ekiti state became inconclusive.
Some delegates, observers, and representatives of aspirants had alleged that the exercise was fraudulent, and this led to the uprising.
In the video now making the rounds, a delegate identified as Demola Adeusi is seen punching off the table the quarter-filled ballot boxes.
HE IS AN ‘AGGRIEVED’ YOUTH LEADER
Adeusi, also known as Oosha, is the APC youth leader in the central senatorial district of the state.
“He is one of the APC leaders,” a party member told TheCable. “He worked with the last APC government in Ekiti, but now he is a supporter of Olufemi Bamisile, a former speaker of Ekiti state house of assembly and one of the APC governorship aspirants.”
The member described Adeusi as one of the popular youth leaders who is “feared” by politicians.
“He has always been the one the APC politicians use to mobilise the youth during electioneering, but he felt abandoned by the people he worked for after the party lost to PDP in the 2014 governorship election,” he said.
There are many other youths in the party who, TheCable gathered, felt abandoned and are now aggrieved.
“At that primary on Saturday, people were already screaming foul before Oosha surfaced,” another party member explained. “It was people from Segun Oni’s camp who first raised the issue that a particular aspirant had more agents than the other.”
The aspirant, it was alleged, used his aides in bringing in unregistered agents.
“The security operatives had been compromised. When an unlettered delegate gets to the ballot box and seeks for help, security operatives stationed around get them to vote for a particular aspirant. This was all the things that ignited the violence, that an already aggrieved Oosha jumped out and scattered everything,” he added.
He punches the boxes and scatters the ballots
WHY WAS HE NOT ARRESTED?
In the video, Adeusi is seen pulling himself out of the grab of security operatives.
“Who would arrest him?” an admirer of Adeusi asked TheCable.
After the incident on Saturday, TheCable spotted Adeusi walking freely in the stadium, and none of the security operatives bothered to touch him, fuelling suspicion that he was acting a script in cahoot with them.
“I think a majority of the aspirants actually supported what Oosha did, and that was why till today he is still walking freely,” a delegate told TheCable.
“Things were already being manipulated in favour of a particular candidate— this, so glaring to the other aspirants at the stadium, and Oosha is now seen as the hero who saved the situation.”
Adeyemi Albert Asemola, the Ekiti police PRO, did not pick his calls and was yet to respond to an SMS inquiry. 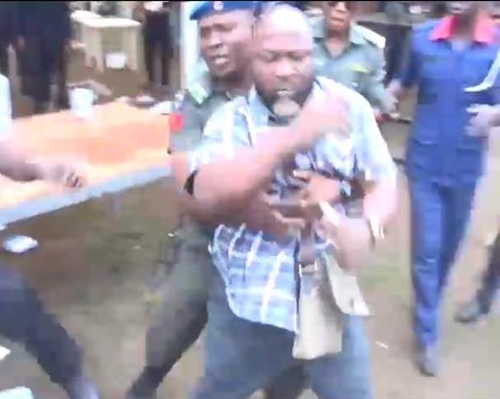 He is pushed away not arrested by the police
‘I TOOK THAT ACTION TO SAVE THE FUTURE OF EKITI PEOPLE’
Although, TheCable could not immediately reach him, Adeusi, in a statement purportedly released by him, he said he took that action to save the future of Ekiti people.
“Putting the records straight. I took that action to save the future of Ekiti people and also the face of the party from the implosion and the crisis that might have erupted which may be beyond control, based on the obvious malpractices occurring during the electioneering process,” the statement read.
“I questioned why an aspirant would have more agents than the other. I questioned why the secutiy officers were not armed while protecting the ballot boxes. I questioned with no answers why people went to the booths with their phones to snap, propbaly so they can collect balance of their financial inducements from aspirants.”
Adeusi, although, apologised for his action, he said “there was no better way the process could have been halted for a correction, other than that.”
The national body of the APC has fixed Saturday for a fresh primary election.
APC has until Tuesday, May 15, to submit its candidate name to the Independent National Electoral Commission (INEC).
WATCH VIDEO BELOW:
Don’t forget to like, comment and share