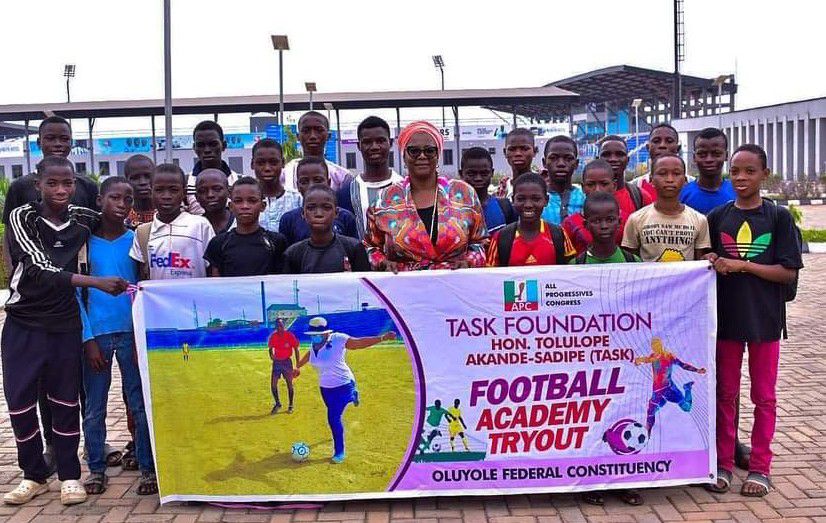 Member of the House of Representatives, Honourable Tolulope Akande-Sadipe has sponsored a football Academy Tryout for 24 players from various football clubs in Oluyole, Oyo State.

Speaking in Ibadan, on Tuesday, Akande-Sadipe, who represents Oluyole Federal Constituency, said that the tryout was held at Beyond the Limit Football Academy in Ogun State, next door to the Remo Stars Stadium.

According to her, the players performed well and were given ample playing time, adding that it is part of her contributions towards enhanced football and socio economic growth of families within Oluyole Federal Constituency.

The Lawmaker said further that the management of the academy may consider four of the players for admission in future.

She said, “They may be considered for further scholarship opportunities in line with the age requirements for admission”.

The lawmaker in her words, said:

“this was a great opportunity for our boys and we look forward to future outings at ‘Beyond the Limit’. The next one is being planned for May 2023. During my tour of the facility, I thought I was in America. The facility is State of the art. So proud of the person behind ‘Beyond the Limit’ and his team. What they have been able to put together is so valuable for the children who have been able to get in”.

The parents of the selected players also thanked the Member, House of Representatives for her support.

OYOSUBEB Wins Merit Award As Agency Of The Year