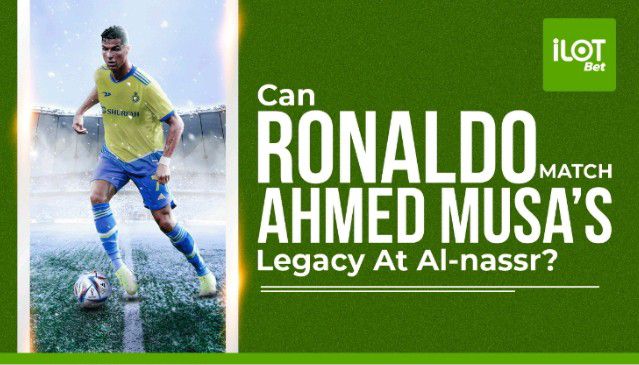 The transfer will reportedly see 37-year-old Ronaldo become the highest-paid footballer in the world, earning around €200 million per year. But before Ronaldo, there was another record-breaking left-winger donning the number seven in the yellow and blue of Al-Nassr, his name is Ahmed Musa.

Obviously, Ahmed Musa is not Cristiano Ronaldo but the Nigerian arrived at Al-Nassr to much fanfare in 2018 off the back of a fantastic World Cup outing. Musa was signed for €16.5 million from Leicester City in the summer of 2018, making him the most expensive transfer in Saudi Arabian football history.

Although the record would later be broken in 2021 by Matheus Pereira who joined Al Hilal for €18 million, Musa’s transfer is still the second-most expensive in Saudi Arabian football and he remains Al-Nassr’s record signing, a record Ronaldo can never break despite his enormous contract as he was signed as a free agent.

As Ronaldo himself said at his unveiling, his time at Al-Nassr is a fresh challenge which means his European achievements, however impressive, do not matter here. He also instantly becomes the greatest player in Al Nassr (and Saudi Arabian football) history by default from a perspective of recognition but he still has to earn his stripes on the pitch as he had done everywhere else he has played before now.

Musa scored seven goals and notched seven assists in 24 league games to deliver the 2018/19 Saudi Pro League title for his team in his very first season which is also the last league title Al-Nassr have won to date.

It took the Nigerian three games to net his first hat-trick, scoring all three goals in a 3-0 away win against Al-Qadsiah FC on September 19, 2018. These are the types of milestones Ronaldo must hit in his first season to justify the massive investment made by the club and establish himself as the superior Al-Nassr number seven.

Ahmed Musa played 57 games in two years at Al-Nassr, returning 11 goals and 14 assists after which his contract was mutually terminated in October 2020, a concept with which Ronaldo has become recently familiar.
Normally, Ahmed Musa’s numbers would be child’s play to Ronaldo but not the 37-year-old version that has struggled to impact games since the start of this season.

It would be foolhardy to expect Ronaldo to score at the same ridiculous frequency he has throughout his career so far, he is clearly past his best and even the much lower level of football in Saudi Arabia might not be enough to mask his decline completely.

Saudi Arabia League is about to take the world by storm with the arrival of one of the finest players on the planet in their League. iLOT BET got you covered with the biggest odds as far as the league is concerned. Try iLOTBET today and increase your chances of winning big.