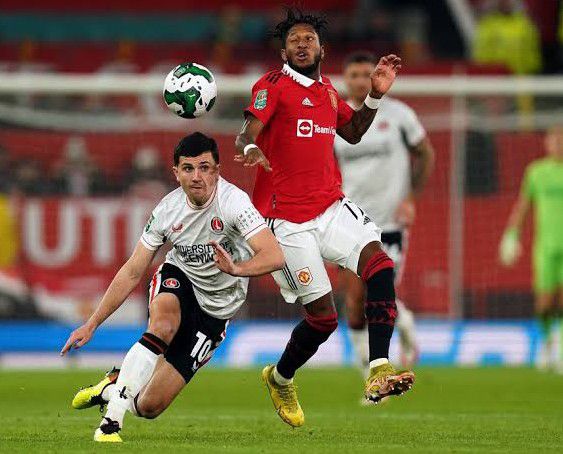 Charlton have been even more competitive in the second half, playing more of the game in Man United’s half and prompted Erik ten Hag to bring on Casemiro, Christian Eriksen and Marcus Rashford.

Mainoo’s night is over as he joins Antony and Fred in coming off. Casemiro, Rashford and Eriksen introduced. Charlton bring O’Connell on for Blackett-Taylor.

Dan Burn has given Newcastle the lead against Leicester in the other Carabao Cup quarter-final of the night.

Blackett-Taylor stands up a ball to the far post after dazzling Malacia. Leaburn decides to go with a high foot against Martinez’s head and connects with the Argentine, conceding a sloppy foul.

Malacia booked for cleaning out Fraser after United want a free-kick of their own as Ashley-Brewer potentially carried the ball over his 18-yard line.

Sessegnon has pushed up to left wing with that Charlton change, Rak-Sakyi coming wide right.

Elanga is well offside as he turns in Wan-Bissaka’s nice ball across goal. He went too early and didn’t need to…

Charlton pounce from a Leaburn flick-on and Fraser fires over from 20 yards.

We didn’t see enough from the Addicks frontman in the first half, that’s what his presence can do!

No changes at the break and little change in United’s tactics either as Maguire looks for another long pass out to Garnacho, although this one fails to come off.

Man United’s authority has shown with 73 to 27 per cent dominance in possession.

They also lead ten to two in shots but both have managed a single shot on target.