“Buhari, Do Not Rejoice Yet” – Fayose Finally Open Up On Ekiti Election

Wiseloaded » News » “Buhari, Do Not Rejoice Yet” – Fayose Finally Open Up On Ekiti Election 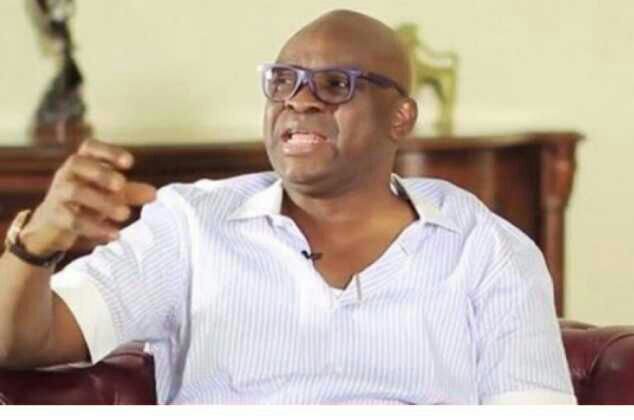 Ayodele Fayose, the outgoing Governor of Ekiti State, says President Muhammadu Buhari should bury his head in shame for using the security agencies and the Independent National Electoral Commission (INEC) to snatch the mandate of the Peoples Democratic Party (PDP) and hand it over to the AllProgressives Congress (APC).

On Sunday morning, INEC declared Kayode Fayemi, candidate of the APC, winner of Saturday’s Ekiti State governorship election, saying he polled 197,459 votes to beat PDP’s Professor Olusola Eleka, who polled 178,121 votes.Responding to the result for the first time on Monday, Fayose, who had repeatedly boasted of victory pre-election, told the presidency not to rejoice yet, ashe will have the last laugh.In a statement signed by his Chief Press Secretary, Idowu Adelusi, Fayose said Buhari haddemonstrated truly that he is not a democrat but a dictator and fascist per excellence.“I am Peter Ayodele Fayose, I hold my head high. I can never be suppressed.

I don’t lose battles and I will not lose this. I will laugh last,” the statement quoted him as saying.“The President should note what the Bible says, which applies to him: ‘He that wears the armour should not boast as he that removes it.’“It is only Buhari that will pride himself with the security shooting sporadically at polling centres, scaring people to pave the way for the APC thugs to snatch ballot boxes.”Fayose said Buhari had won “shame” from Ekiti people, Nigerians and the international community.“If APC has truly won, why is it that there is no jubilation in Ekiti?” he wondered.“The victory of Kayode Fayemi is pyrrhic. We will reclaim the stolen mandate in the court by the power of God.” 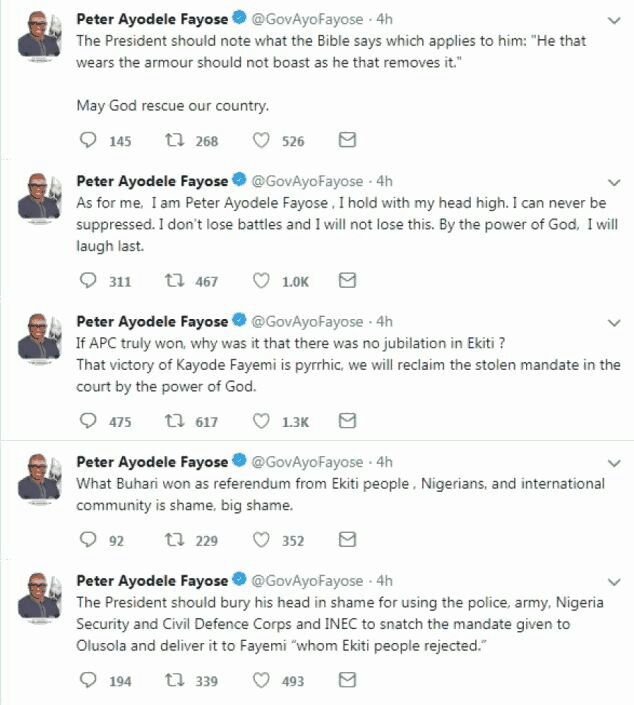 Why INEC, Buhari Govt Should Be Blamed For Election Postponement – Atiku

Fayose Reportedly Reaches Out To Labour Party For Presidential Ticket

Nigerians Are Responsible For The Increase In Level Of Corruption – Presidency