Sergio Aguero inspired Manchester City to a comfortable win over Chelsea to set the tone for the champions ahead of their title defence and secure the Community Shield.

The Argentinian proved deadly in front of goal and helped nullify
the early stages of ‘Sarri-ball’ under the newly-hired Maurizio Sarri.
Pep Guardiola’s Blues are at a far more advanced phase and showed just why they strolled to the title last term, with Aguero capitalising from good work from Phil Foden to break the deadlock.

It was Bernardo Silva, another player likely to take a leap in his
development this term, who set up the second with a lovely ball in
behind that Aguero duly gobbled up.
City still look the clear favourites ahead of their Premier League
opener vs Arsenal next week, while Chelsea have plenty of work to do before their trip to Huddersfield. 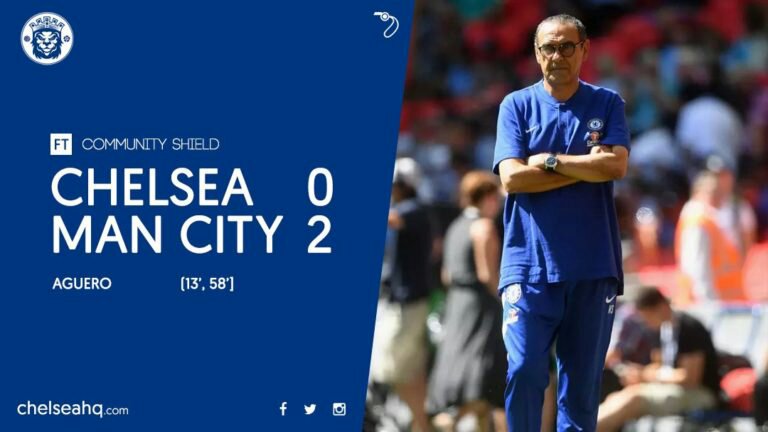 The stage was set for Riyad Mahrez at a sun-kissed national stadium but the £60million man was kept relatively quiet on his first competitive match in a Manchester City shirt.
The 27-year-old, who arrived from Leicester City earlier in the summer, started on the right of Pep Guardiola’s front three, trying to twist and turn his way down the wings.

His best chance came on 35 minutes when Bernardo Silva spotted him in acres of space on the right of the box, however his first touch took him too close to David Luiz.
Mahrez had a couple more decent attempts from set-pieces but
largely played a supporting role, as Chelsea left-back Marcos Alonso looked to have the better of him.

Callum Hudson-Odoi’s fine pre-season form earned him a start
against Manchester City in the Community Shield.
At just 17 years of age, the winger boasts a tremendous amount of potential. Despite not making the mark he would have wanted to, the youngster will have gained bags of experience at Wembley on Sunday.

Coming up against World Cup star Kyle Walker and a fantastic
Manchester City side was always going to be a tough ask. But the
teenager showed plenty of bright sparks throughout the game.
His appearance may have ended in defeat, but it was a day to remember for Callum Hudson-Odoi.

3. Sarri-ball a work in progress

Maurizio Sarri will obviously need time to implement his philosophy at Chelsea, but Manchester City were the worst possible opponents to expose that.
Their relentless, organised press ensured Jorginho was unable to
set the tone in possession.

While David Luiz and Antonio Rudiger struggled to help the Italy
international to bypass that first wave led by Sergio Aguero.
N’Golo Kante will help once he returns to the side, with the World
Cup winner’s dynamic movement off the ball, but Chelsea fans
must be patient if they are to ever see Sarri transmit his work from
Napoli.

4. Aguero as deadly as ever

One delicate touch and a stunning finish with his left set the tone
for a wonderful display from Aguero.
His opener was followed up by a delightful second, capitalising on
Bernardo Silva’s vision by matching it with some clever movement
off the last man.
Aguero, in this form, will be the favourite for the Golden Boot,
though Harry Kane, Romelu Lukaku and Mohamed Salah will all provide fierce competition to one of the most fascinating story lines of the new season.

5. This could be [Bernardo] Silva’s season

We are all used to David Silva running City’s midfield but if
Sunday afternoon was anything to go by, it could be his namesake Bernardo’s time to shine.
Signed last summer, the Portuguese was played further forward than Pep Guardiola would have liked due to a shortage of forwards.

But now that Riyad Mahrez has arrived from Leicester, Silva was
able to play in the more appropriate No.8 role at Wembley. His assist for Sergio Aguero’s second and defining strike was a joy to watch and had City fans purring.