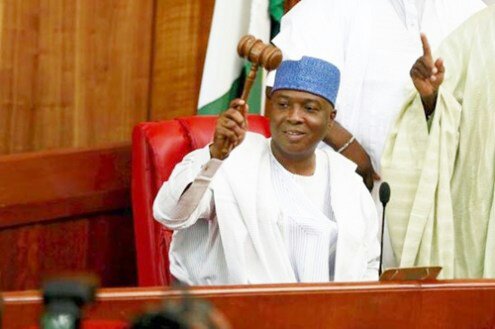 More details have emerged into the Controversial
withdrawal of security aides from the Senate
President, Bukola Saraki and the Speaker of the
house of representatives, Yakubu Dogara.
It was learnt that the withdrawal is reportedly a retaliatory move
by the DSS chief Lawal Daura after a Senate committee refused to
approve the security’s agency allocation in the 2018 budget.
According to Premium TImes;
“The State Security Service (SSS) implemented about 65 per cent
drawdown across board in security protection for the top
lawmakers on Saturday, sparking a nationwide uproar. The
controversial exercise on Saturday afternoon affected Senate
President Bukola Saraki, Speaker Yakubu Dogara, Deputy Senate
President Ike Ekweremadu and Deputy Speaker Yusuf Lasun.
Following an urgent security meeting with Vice President Osinbajo
on Monday and political pressure from the so-called new PDP bloc
of the ruling All Progressives Congress (APC), the secret police on
Tuesday partially returned some of the withdrawn officers to
Messrs Saraki and Dogara, according to security sources. It was
unclear if Messrs Ekweremadu and Lasun had seen a partial or
full restoration of the personnel withdrawn from them.
The disagreement stemmed from the National Assembly’s rejection
of a presidential approval issued to the State Security Service for
the inclusion of “some handsome billions of Naira” into the 2018
budget, according to legislative sources familiar with the matter.
The botched SSS allocation, similar to similar ‘security allowances’
approved to other agencies like the police and the military, was
rejected because Lawal Daura, the head of SSS, failed to defend
the expenditure when he appeared before a Senate committee
vetting the proposed security earmarks, multiple sources familiar
with the episode say.
“Rather than answer critical questions and make a strong case to
justify his allocation, like the army and the Police Service
Commission, did, he merely assumed that the presidential approval
he brought to the National Assembly was all that was needed —
he even tried to intimidate lawmakers by suggesting that their
oversight functions were often laden with corrupt instincts,” a
source said.
But rather than see the rejection of the SSS request as a direct
consequence of his own conduct, Mr Daura decided on a
retaliatory measure against the presiding officers, striking first with
the drawdown of their security guards.
Around two-thirds of the 84 SSS personnel attached to the
presiding officers were withdrawn without prior notice on Saturday.
Mr Saraki’s security detail was reduced to nine from 23. Mr
Dogara’s personnel were also reduced to nine from 23. With the
duo receiving five more personnel, each now has 14 officers as at
Tuesday night.
The partial restoration came a day after Mr Osinbajo met with Mr
Saraki, Mr Daura, Attorney-General Abubakar Malami and
Inspector-General Ibrahim Idris in an emergency meeting whose
details were not disclosed to the media.”

APC vs PDP: Why We Endorsed Saraki – Fulani Community

How I Escaped The DSS Attack This Morning – Bukola Saraki Reveals