Ronaldo Finallay Talks About His Comparison With Mohamed Salah 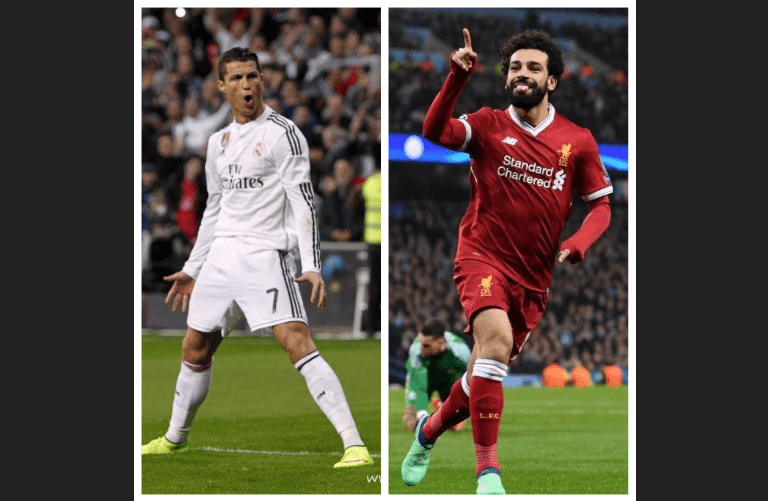 Cristiano Ronaldo and Mohamed Salah are neck-to-neck on 44 goals this season, but the Real Madrid star thinks any similarity ends there.
The Real Madrid ace maintains there is no point comparing him with the Egyptian attacking maestro, Mo Salah as they are “completely different” players.
The comparison between the two footballers began after the Egyptians stellar performance this season with the Premier League side, Liverpool netting 44 times across all competitions to equal Ronaldo.
Salah has enjoyed a record-breaking first season at Anfield, becoming the first player to score 32 goals in a 38-game Premier League campaign, while he has also netted 11 times in Europe.
Ronaldo, meanwhile, recovered from a difficult first half of 2017-18 to match Salah on 44 goals in all competitions, with 15 of those coming in Madrid’s run to a third consecutive Champions League final.
The two forwards will go head to head on Saturday when Jurgen Klopp’s side take on Real Madrid in the Champions League final in Kiev.
Ronaldo insists he shouldn’t be compared with Mo Salah as they are different types of forward on the pitch.
“People want to compare me with other players. I’m different than anyone, Salah is different than other ones,” he told BT Sport.
“He plays with the left, I play with the right; I’m tall, he’s a little bit shorter, I play with the head. We are completely different.
“But, I have to say, he had a fantastic season. Saturday… let’s see.”

C. Ronaldo Names Two Players To Replace Him And Messi

Keylor Navas Blames Ronaldo For Their Loss To CSKA Moscow

Cristiano Ronaldo Could Be Next Manchester United Captain