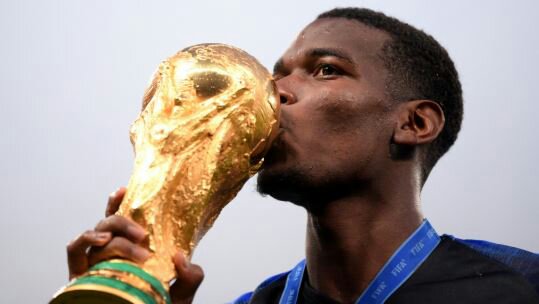 Reports have suggested that the World Cup-winning midfielder could
be on the move this summer, but the Red Devils have never contemplated selling.

Manchester United are unwilling to allow Paul Pogba to leave the club
amid claims that his agent has been lining up a move to Barcelona or
Juventus.

Reports emerged in recent days that super-agent Mino Raiola has been
attempting to secure Pogba a move away from Old Trafford two years
on from his return to the club for a then-world record transfer fee of
£89.5 million ($116m) from Juve.

A meeting between Pogba and his former France team-mate Eric Abidal
in Los Angeles was construed by some as a potential approach by Abidal, now technical secretary at Barcelona, while there have also been suggestions that Juventus were willing to offer midfielder Miralem
Pjanic in part-exchange for the 25-year-old.

But Goal understands that United have never considered allowing
Pogba to leave in the current transfer window, with this Thursday’s
deadline for purchases by English Premier League clubs making a sale
of such a key player even more irreconcilable.

While Pogba would technically have until the European transfer deadline
day on August 31 to secure a transfer to any continental club, United
would only have until 5pm BST on Thursday to sign a replacement.
United also have no interest in agreeing a part-exchange deal, with
Juventus themselves believed to be keen to hold on to Pjanic despite
reports to the contrary.

Jose Mourinho has already become perturbed at the need to wait so long to discover the result of the attempted capture of Tottenham’s Toby Alderweireld and is not ready to entertain such a momentous loss to his existing playing group this late in the day.

Pogba remains a key part of Mourinho’s plans at Old Trafford despite a dip in form last spring resulting in the manager leaving him out of the starting line-up for a number of fixtures, including both legs of their Champions League exit to Sevilla.

The addition of Fred from Shakhtar Donetsk this summer is seen as a
signing to complement Pogba and Nemanja Matic in Mourinho’s first-
choice midfield rather than helping to clear the way for a sensational
sale.
The manager has recently challenged Pogba to recreate with United the
kind of form which saw him star in France’s World Cup triumph over the
summer.

“I hope that he understands why he was very good,” Mourinho said. “I
think that’s the point about his performance level, his contribution to a winning team, for him to understand why he was so good, especially in the second part of the competition, the quarter-final, semi-final and final where in my opinion he was absolutely brilliant.”

Pogba returned to training at United’s Carrington base on Monday ahead of Friday’s Premier League opener against Leicester City. He was among a number of players given dispensation to take a full three-week holiday after his country had gone all the way at the World Cup.