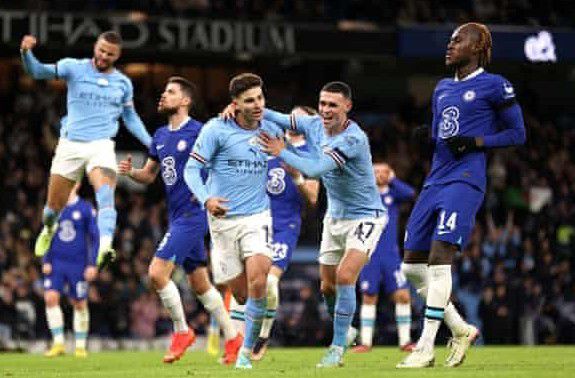 We shouldn’t forget that Chelsea are without nine senior players. Even so, this is a sore one because they are being hammered by a City team that includes only a handful of regulars.

Mahrez with the ball across the box and Alvarez can’t quite reach it. Chelsea then concede a needless corner.

Box-of-tricks time for Foden, who volleys a backheeled flick to Alvarez. He can’t get to the return and the ball loops back to Kepa.

But, blimey, there’s a swagger about Manchester City now that’s a dreadful sight for Chelsea. Bernardo Silva is fouled right on the edge of the box by Kalidou Koulibaly.

That initially did not look good. Laporte slips to the floor and immediately has his head in his hands. Turns out he was accidentally caught by Gallagher in the face.

Chelsea obviously have to open up a little more now, but that will leave an inexperienced defence expose.

Phil Foden just sauntered through midfield to find Cole Palmer. The attack was snuffed out but it feels like there’s plenty more joy to be had for City.

Man City’s issues with penalties have continued this season with Riyad Mahrez missing two and effectively standing down or being stood down from duties.

But Julian Alvarez stepped up and squeezed it past Kepa: maybe City have a new taker on their hands when Haaland isn’t on the pitch.