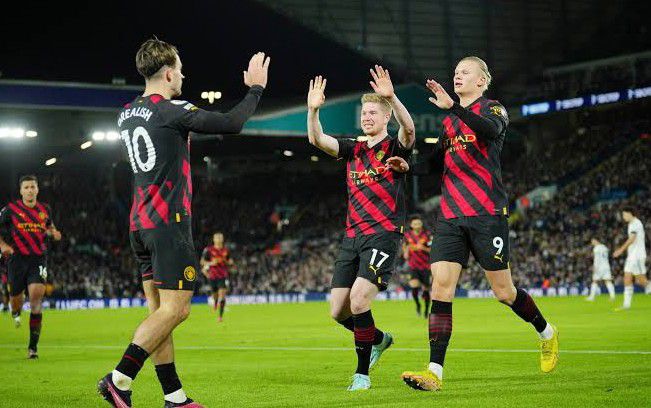 Erling Haaland scored two goals and Rodri scored one goal for Man City to claim the 3 points of the match.

This is a nice moment. Darko Gyabi – sold by City in the summer – is on for his Premier League debut against his former club for Leeds. Brendan Aaronsen goes off.

City are furious as they have a man down near the touchline, but play goes on and Rodri is forced to bundle Willy Gnonto over just outside the area. Leeds have a free kick in a dangerous position.

This game is far from over after the Struijk goal. Joe Geldhart thinks he has a second for his side, but his poke goalwards from a dangerous cross trickles the wrong side of the post. Or the right side, as far as City are concerned.

City carve through the Leeds defence and Erling Haaland has a run on goal to grab his hat-trick. Maybe he takes too long, because Islan Meslier comes out (again) to deny him. In fairness, the Leeds goalkeeper has been fantastic this evening.

Jack Grealish went off just before that goal, and earned a big hug from Pep Guardiola. He missed three golden chances in the first half, but made the second and third goals that put the game firmly in City’s control.

While the home fans gave him one last boo, the City fans sung his name in appreciation.

Check out the latest Leeds United highlights and goals here