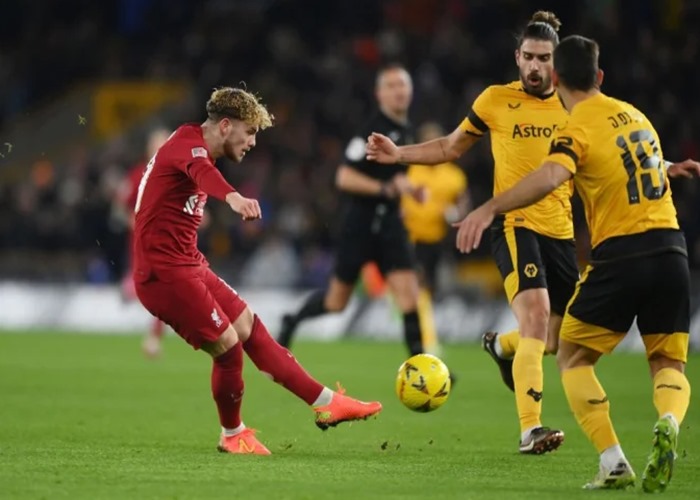 Wolves vs Liverpool’s match started with full attacking forces. Liverpool won the second leg with 1-0 after a disappointing first leg ended at 2-2 draw at Anfield.

The Reds proceeds to the forth round of 2022/23 English FA Cup tournament.

Two noticeable improvements from Liverpool so far; pressing in packs and winning their duels in midfield. No surprise either that Thiago is looking back to his best and far more involved with runners either side of him. Elliott bright, too.

A brilliant pass from Kelleher, a superb touch and run by Tsimikas which takes him in field brings the first yellow card of the game, dished out to Traore.

There are some murmurs of discontent from the crowd, but they will know deep down that there are no doubts over that decision.

Trademark textbook volley from Neves at a half-cleared free-kick, well blocked by the Liverpool defence. That was travelling! The visitors have been decent so far in fairness.

It’s not all clicking or firing but it’s been a vast improvement on the weekend and they lead! They haven’t done that much of late.

Case of Gakpo not quite being on the same wavelength as his team-mates, as he comes short to receive it when there’s acres of green grass in behind. Keita presumes he’ll make the right run and the ball ends up back with Wolves.

The ball is then flinged over the top by Toti for Traore whose speed sees him burn past Tsimikas. His shot is wide.

Some hit by Elliott, that. It was one of those that the minute it left his foot, it looked like it was going to go in. And it did. It’s warmed up the Reds fans on a very cold night.

Liverpool are controlling this game superbly. Harvey Elliott and Thiago have combined really well in midfield, and Wolves cannot get near them.

Tighter runs from their forwards, just delaying them by that split second more will surely see them put this game beyond the hosts.

Check out the latest Wolves highlights and goals here