#EndSARS: HR Manager Narrates How He Was ‘Robbed’ By SARS Officials Who Threatened To Drink His Blood

Wiseloaded » News » #EndSARS: HR Manager Narrates How He Was ‘Robbed’ By SARS Officials Who Threatened To Drink His Blood 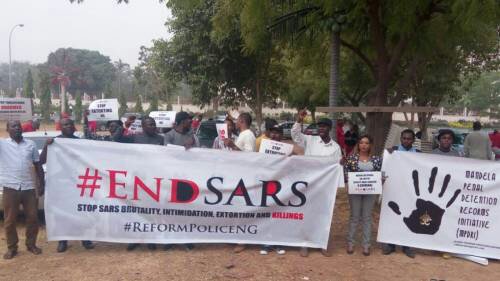 “The moment I tried to get my shoes, the policemen went berserk
and started slapping and hitting me. One of them was shouting
that he drank blood and he was ready to drink my blood. He
pulled my shirt and trousers and threw me into their vehicle, a
Sienna, without a number plate.” Mahmud said.

Kamil Mahmud, a Human Resources Manager, has narrated how he
was arrested and “robbed” by operatives of the Special Anti-Robbery
Squad (SARS) despite committing no offence.
He also said the officials repeatedly threatened to shoot him, one even
saying he was ready to drink his blood.
Speaking with Punch , the 26-year-old Edo indigene said he had driven
behind his brother’s car to the Ikeja area of Lagos for an interview on a
radio station on Thursday.
They were returning on Friday when three policemen allegedly accosted
them at the Agidingbi. Mahmud said he was about to park by the
roadside when the operatives cocked their guns and threatened to
shoot.
“I waved my hand to tell them that I was not running away and I just
wanted to find a place to park. I was thinking it was going to be a
normal civilian-police conversation. But I realised the situation was
getting more aggressive even before I got down from the car,” he said.
“One of the policemen asked me to come down from the car and told
my friends and my brothers, who were driving behind me, to stay back.
I came down and he said he wanted to search the car. I told him to go
ahead. But before he even tried to search, he had started manhandling
me.
“I told him that he had not even asked for my name or who owned the
car I was driving and what I did for a living. However, he searched me
and the car without finding anything incriminating. I don’t drive with my
shoes on; so, when I got down, I was barefooted. I told the three
officers more than five times that I wanted to get my shoes, but they
looked at me with no response.
“The moment I tried to get my shoes, the policemen went berserk and
started slapping and hitting me. One of them was shouting that he
drank blood and he was ready to drink my blood. He pulled my shirt
and trousers and threw me into their vehicle, a Sienna, without a
number plate.”
Continuing, Mahmud said a passerby who wanted to intervene was
threatened with a cutlass. He added that he had attempted to beg the
officers when one of them further beat him with a cutlass.
“As I sat on the back seat of their car, one of them put handcuffs in my
hands. They never told me what I did wrong.

“The one who assaulted me with the cutlass started the car and drove
to Ikeja GRA. On getting to the Area F Police Command, the officers
refused to enter the premises and I told them that they should take me
inside the station and file a report because I really wanted to know what
my offence was. They shouted at me that I still had the mouth to talk.
“The officer driving had a bottle of gin in front of the car; he was
drinking and driving. They later negotiated with my brothers and
demanded N15,000. My brothers went to use the ATM at Conoil Filling
Station, but the ATM did not dispense cash. Then one of the policemen
got angry and started driving towards Oba Akran Road. When we got
there, he parked and waited for my brothers.
“My brothers came and told them that they were able to get N8,000.
They collected it, removed the handcuffs from my hand and told me to
get out of their car.”
Mahmud demanded the arrest and prosecution of the policemen,
saying he was robbed by the law enforcement agents. He said the cops
wore the F-SARS jackets and had guns with police tags. However,
Chike Oti, the Lagos State Police Public Relations Officer, expressed
doubts that this was possible.
“They are not SARS officials because SARS officials in Lagos State have
uniforms that have code numbers with which they can be identified
easily and SARS officials in Lagos State are under the instruction of the
Commissioner of Police not to conduct stop and search in Lagos
State,” he said.
“However, the complainant should come forward to give us vital
information about the officers, so that we can arrest whoever the
people might be; but I know that they are not SARS officials.”