DANGER!!! ‘Ekiti Election Is A National Embarrassment, There Is Danger Ahead’ – Fayose Cries Out

Wiseloaded » News » DANGER!!! ‘Ekiti Election Is A National Embarrassment, There Is Danger Ahead’ – Fayose Cries Out 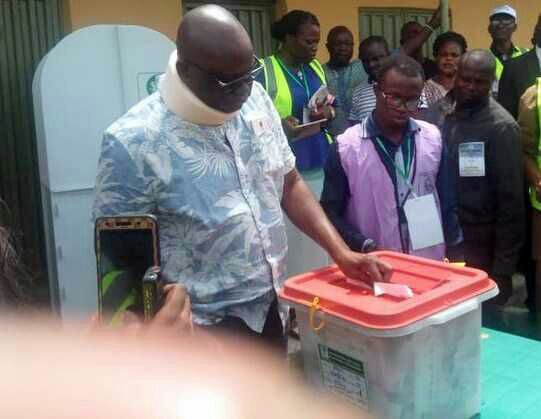 Addressing journalists shortly after voting in his ward 001, St. David’s Primary School, Maternity Area, Afao, he said the election was compromised by security agents.Fayose, who voted at 1:30 p.m., said he was responding to treatment and would return home after casting his vote.He said Ekiti people are contending with security agencies, adding that the deployment of 30,000 military and paramilitary officers to the state was to intimidate the voters.He said:

“I want to say that the Independent National Election Commission (INEC) has good intention. But the process has been hijacked by security agencies. This is a national disgrace and there is danger ahead.“Remember we raised all these issues, as I speak ballot boxes are being snatched by thugs in the very eyes of security personnel. What they call ‘see and buy money politics’ is going on right now.“The police and civil defence corps are aiding the process. I must repeat this is a national disaster because the election is marred by violence.

”Fayose said members of the Peoples Democratic Party (PDP) were arrested by security personnel.“In almost all the local government councils in the state, PDP chieftains are being arrested. They have arrested House of Representatives members. As I address you right now, my chief of staff was arrested and detained an hour ago.

“We fight corruption everywhere, but when wrong people are in authority, the effort will not yield the desired result. It is the wrong thing that will happen to nation. The Bible says when the righteous are in authority, the people rejoice. But when the wicked are in authority this is what you get.“If this is the sample for 2019, I must say it is a lost ground. I want to say very specifically that this is a lost ground for the Nigerian electorate. They have taken over the election from INEC,” the governor stated.

EXPOSED! Fayose Reveals What Transpired Between Him And The Sacked DSS Boss, Daura Over Buhari