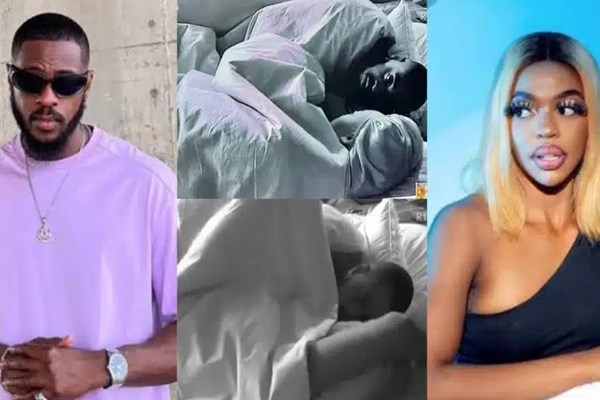 BBTitans housemates Khosi and Yemi set tongues wagging as they share a kiss in bed, 2 days after the show started.

The reality stars hit it off together on Day One as they’ve both been seen enjoying each other’s company.

Ensconced in their duvet after a period of chatting together they decided to take their friendship to another level by getting intimate.

They shared a kiss while lying in the same bed after which they continued their chat.

This has stirred reactions from viewers who marvel at how fast they seem to be taking things;

@MaiaOma wrote: “If things work out with Yemi and Khosi it would be our new version of Sheggz and Bella but with maturity Khosi knows how to handle herself and Yemi has composure and mixes well with all females “

@Cyra_1123: If you leave emotions aside, you’ll enjoy BBTitans and understand that this is a game and everyone in there is a game player. Everything done there is deliberate and intentional

@ZarkiaBraimah1 : Isn’t that what you guys want?Idgu guys again ,next thing there are boring

@Liferain3: Shella spices u were my antidote literally nothing to Awwww about I’m now a hater of “beautiful things because of your authenticity everything else is now counterfeit I’m going to enjoy this season

@abigail_kponton : Naso they will be rushing this guys as if na serious relationship….if it doesn’t sail…they will say he is a gay…..we won’t take that nonsense again…

@kimmyrussles : He banna, but honestly, do y’all think Yemi really o rata Khosi like that? Ke nahana ke distraction fela from his side