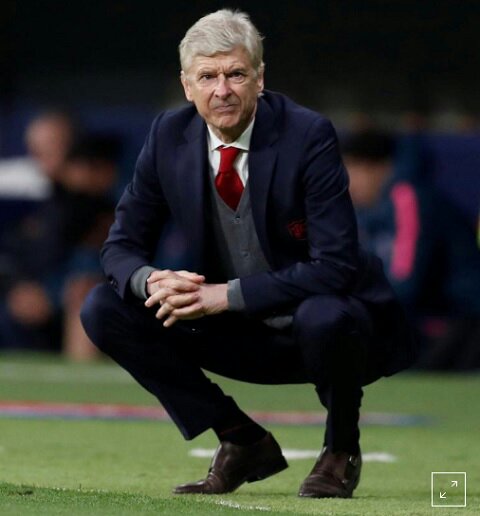 Arsenal manager, Arsene Wenger was sad and frustrated after missing out on the Europa League final following Thursday’s 1-0 defeat at Atletico Madrid in his last European game in charge of the London club.
Wenger’s 250th European match as a manager was ruined by familiar foe Diego Costa, who struck the only goal in first-half stoppage time before Atletico’s famously mean defence clung on to keep a 12th consecutive home clean sheet and book their place in the final 2-1 on aggregate.

“I am sad and very disappointed overall, very frustrated as well,” Wenger told a news conference.
“When you go out of the competition it is very difficult to take. It’s very sad, very, very, very sad. I’m very sad tonight. Unfortunately, you have to go through that – the game can be very cruel. Sometimes it’s very nice, but the suffering is very strong tonight.”
The defeat means Wenger will leave Arsenal at the end of the season after 22 years that yielded three Premier League titles and seven FA Cups but no European trophy.
The Frenchman said he still rued his team’s profligacy in the 1-1 first-leg draw at the Emirates Stadium after Atletico had been reduced to 10 men early in the game when Sime Vrsjalko was sent off.
“We missed something in the final third. Looking at the chances over the two games, the least we could say is we are very frustrated,” Wenger added.
“The tie should have been over in the first game. We missed a lot of opportunities and missed something in the final ball. They (Atletico) are a team that defends well. I believe we were a bit unlucky a few times.”
He also cursed referee Gianluca Rocchi’s leniency in the face of Atletico’s fierce challenges.
“I think Gabi (Atletico captain) is happy to stay on the pitch. They broke a few counter-attacks and the referee took a while to give them a yellow card in situations where we could be very dangerous,” Wenger added.
“They are a clever side that defends very well. (Diego) Godin saved five or six goals. They were in amazing positions and they have great defenders.
“It was a very intense game between two teams that gave everything. Congratulations to them and good luck to them in the final. I would say the winner of tonight’s game is the clear favourite in the competition.”

Arsenal Complete £45m Signing Of Partey, Torreira Out On Loan