Why Is Drag Queen Bingo So Popular?

Wiseloaded » Celebrity Gist » Why Is Drag Queen Bingo So Popular?

Sometimes, the best combinations are when you take two unexpected flavours and mix them together. Take peanut butter and jelly, fries and milkshake, the Founding Fathers of the USA and rap – all great independently, but even better together. That’s why the latest trend of drag queen bingo has seen such a rise in popularity in recent years.

The events take the game of bingo, which is fast-paced and exciting enough to fill out entire venues, and throw in some drag queens to compere, make jokes, perform routines, and gives audiences a good time. So, is drag queen bingo just a flash in the pan or is it here to stay?

Drag queen bingo is personified by the callers in the game being in drag, the calling being cheeky and full of double-entendres, the prizes being audacious, and the atmosphere being fun and electric.

Recently, in the US, more events have even been done for charity, such as to Save the Koalas in Australia, according to Capitol Hill Seattle. The event is unique in that it can be as part of a drag queen brunch or can be a night-time event alongside a full-on cabaret show.

No two visits are the same, and the event helps galvanise the fun that you and your friends will have. The appeal of a drag queen could be added to any event to give it a framing of merriment and fun, but why have they chosen bingo?

Bingo has certainly grown in popularity with younger demographics, not just its typical older crowd. This is in part due to the ways in which the game is played adapting to the new audiences. For instance, Bongo’s Bingo and other nightclub-style bingo events in the UK and Europe encourage people to view bingo in a new light and engage with it in a way younger people would want to.

The event is especially popular in Ibiza, and played at 18-30 destination Ibiza Rocks, according to Ibiza Spotlight. There are dancing elements, outrageous prizes, and it encourages people to let loose and have a lot of fun.

One review we always get back is that there is always smiles across the board when we do our shows. Check out the list below of upcoming shows. All at Tap Room in Ypsi!

One review we always get back is that there is always smiles across the board when we do our shows🥰 Check out the list below of upcoming shows. All at Tap Room in Ypsi!
– MARCH 20: Drag Bingo at 7PM
– APRIL 10: Drag Bingo at 7PM
– MAY 9: Boylesque Presents: 90s Party at 10PM pic.twitter.com/J13GOK9a1r

Moreover, online bingo has also reached new audiences as those less familiar with the game, but familiar with gaming online, can have a go with the added digital elements of exciting visuals and tense audio.

As we can see at sites like Paddy Power, there are a range of bingo games that use themes, such as leprechauns and their pots of gold at the end of the rainbow in Rainbow Riches, and the Greek mythology in Age of Gods, to attract diverse audiences and frame the game once again in a new way.

Both methods have helped bingo move away from its traditional demographic to showcase how fun it can be, which is why adding drag queens and creating new, innovative events works so well.

Drag queen bingo is like brunch – many expected it to be a passing trend, but it has remained strong since its inception. The experience combines the frivolity that you’d expect at a drag show with the excitement and tension natural to a game of bingo.

Bingo is now proving more popular among younger audiences, and drag queens themselves have gained popularity thanks to RuPaul’s Drag Race – teaming the two up has led to a new timeless trend. 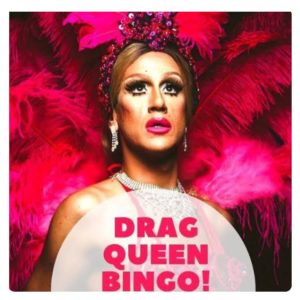