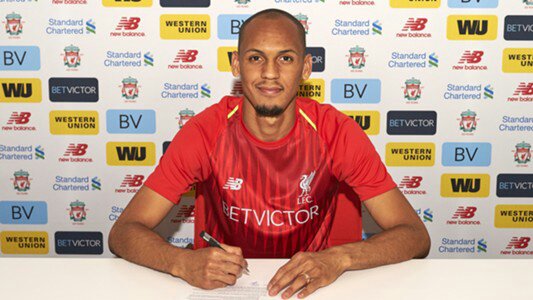 The Brazil midfielder has put pen to paper on a long-term deal that
sees him move to the Champions League runners-up
Liverpool have announced the signing of midfielder Fabinho from
Monaco for a fee of €45 million (£39m/$52m) plus bonuses of up
to another €5m (£4m/$6m).
The move comes less than 48 hours after the Reds fell to Real
Madrid 3-1 in the Champions League final.
Liverpool have said the 24-year-old Brazilian’s move will complete
on July 1 having completed a medical and signed a long-term deal
with the club.

And the midfielder says he is happy to have linked up with the
Champions League runners-up, calling Liverpool a “giant of a
team.”
“This is something that I always wanted – this is a giant of a team.
The infrastructures of the club look exceptional,” Fabinho told the
club’s official website .
“A football club of this size coming after my services, I didn’t have
to think that much about coming over.
“I will try to create my own history at this football club. Hopefully, on
a personal level, I’m able to win titles with this club.
“I will try to grow and learn and improve myself, and to be part of
the club’s history.”
He added to RMC: “I’m really happy to join Liverpool. In the last
transfer window, things were a little difficult. It was almost done, but
I stayed.
“I’ve done great things with Monaco, it was great for five seasons.
At Liverpool, I hope to have the same success. It’s a big club, really
ambitious, which has done great things in recent seasons. They
were in the Champions League final and were still among the leaders
in the Premier League.
“I think I can grow a lot and learn a lot at this club. It’s a league I
like a lot. I hope I can continue to develop at this great club.”
Meanwhile, Monaco’s vice president Vadim Vasilyev heaped praise
on the outgoing player.
“I want to salute a player who, despite his young age, has set an
example on and off the field thanks to his exceptional technical and
human qualities,” he told RMC.

I’m proud of his progression,
which confirms, once more, that knowhow Monaco have in
progressing young talent in world football.”
Fabinho spent one season on loan with Real Madrid, playing mostly
for their second side, which at the time was in the Spanish second
division.

He moved to Monaco in the summer of 2013, and went on to make
225 appearances in his career there.
Fabinho also scored 29 times for Monaco, including nine times in
2016-17’s Ligue 1 campaign, when he helped Monaco stun Paris
Saint-Germain for the league title.
He also reportedly had the interest of Liverpool’s Premier League
rivals Manchester United, but the Reds have swooped in to beat
other clubs to the punch. Previously Liverpool had been linked with
Napoli’s Jorginho.
Fabinho represents Liverpool’s first signing of the transfer period,
but he is unlikely to be the last as Goal can confirm the Reds are in
pursuit of Lyon playmaker Nabil Fekir , with Borussia Dortmund’s
Christian Pulisic also among their potential targets.