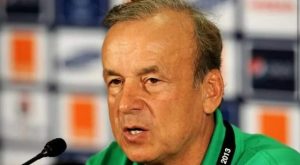 Former Super Eagles coach, Gernot Rohr has revealed that some people within the Nigeria football circle during his time did not want Moses Simon to be part of the team.

The 68-year-old German tactician said this while praising Simon contributions to the team in the on-going 2021 Africa Cup of Nations in Cameroon.

The 26-year-old Nantes player has so far made two assists and scored one goal as the Super Eagles prepare to face Guinea-Bissau today.

“When I was coach, a lot of people wanted me to drop him, but he is very important to my team

“He puts the team first and plays for all with ease. I love his attitude on the pitch and he’s a perfect gentleman off the pitch.”

Super Eagles top their group with maximum six points from two matches after defeating Egypt 1-0 and 3-1 victory over Sudan.