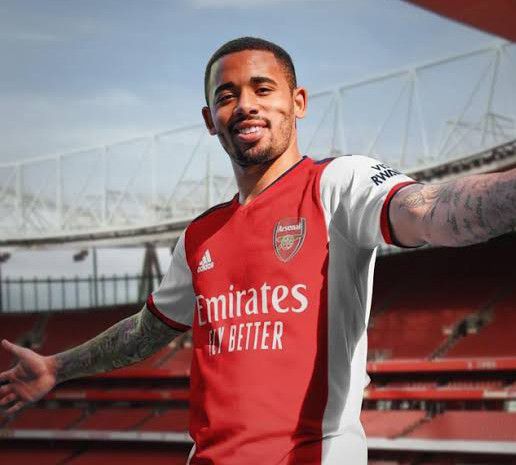 Gabriel Jesus will sign for Arsenal after Manchester City agreed to the sale of the Brazilian international in a £45 million deal.

The striker has already completed his medical with the club and is currently finalising his duties before it is officially announced.

Many speculated as to what number the 25-year-old would wear at the club next season.

A leaked video of Jesus walking around the club in his new Arsenal shirt has indeed revealed that the No. 9 is all his.

Gabriel Jesus, wearing Arsenal’s #9, at the Emirates Stadium this morning, as the club prepare media duties ahead of the announcement of his move. 👀 #afc pic.twitter.com/D5BVTaSOVU

Vacated after the departure of Alexandre Lacazette, Jesus takes the number previously

The more recent history of the number has not been the most successful.

Lucas Perez, Lukas Podolski, Chu-young Park and Julio Baptista have all been adorned with the famous number.

Arguably the player that broke the mould in the Emirates era was the Croatian international Eduardo, up until he suffered a broken leg.

However, there is an altogether different feel about this move for Jesus.

It represents a serious step in the right direction for the club bringing in a proven Premier League forward.

An announcement of the signing is expected in the coming days. With the stature of the move, it is likely fans can expect a seriously in-depth unveiling.

Fabio Vieira’s arrival came with a long behind-the-scenes coverage of his arrival at London Colney.

With Jesus being filmed at the Emirates, it appears the home of the club will be a greater focus for his signature.

Arsenal’s senior side returned for pre-season training on Monday and Jesus is sure to join them very soon after being granted an extended break having been away with the Brazilian national side.

His first opportunity to play could come in the friendly against Nuremberg next Friday whilst away at a German training camp.

Sevilla in the Emirates Cup, the place where Jesus is expected to make his home non-competitive debut for the team.