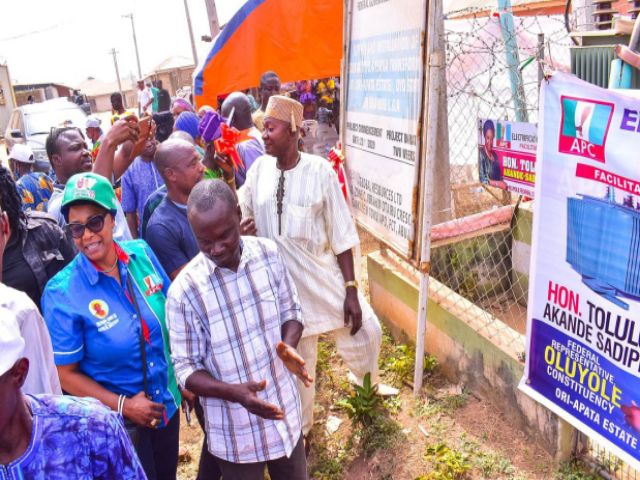 The House of Representatives member from Oluyole Federal Constituency, Tolulope Akande-Sadipe over the weekend resumed commissioning of her constituency projects in Oluyole, Ibadan, bringing the number of boreholes by the Representative since June 2019 to 21.

The Oluyole Representative also revealed that, so far she has facilitated 188 solar lights, construction of 12 schools and 23 new transformers.

The Oluyole Federal Representative also commissioned another school project Ajogbelede Basic Primary School, one of the 12 she facilitated along with Boreholes in Babalola and New garage.

Earlier on Saturday, she described the projects as the real dividends of democracy.

Speaking with journalists, Akande-Sadipe said: “It is my duty as a Legislator to represent the people; both those who voted me in and those that did not. That’s what I ’ve been striving to do over the years and I will not stop doing this for the love of my people as it’s not the primary function of a legislator”.

“So far, in Oluyole I have facilitated 188 solar lights, construction of 12 schools and 23 new transformers and 21 boreholes. In fact, if you count from when I was first elected to the House of Representatives, it goes way beyond that.”

“This is the real dividends of democracy. When I was campaigning, I based my campaign on WREEPP and I promised to deliver my service on these pillars. I have done these and more; facilitating, construction of roads and different projects that can be seen, some of which we are commissioning today. We will continue to do more, it’s just never enough.”

He added that since she started representing Oluyole, the constituency has experienced a great turnaround with many projects. “Oluyole people have felt a great change”, he said.

Leaders of Adeyeri-Ajogbelede and Ifesowapo General zone also presented the Representative with a merit award for donating transformers to their communities.

Reaction As Nigerian Man Without Leg Works As Driver (Photo)