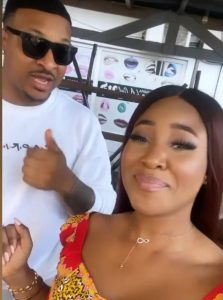 Since Erica Nlewedim got featured in the movie “Devil in Agbada“, she has had chances in the movie industry to meet some notable Actors and Actresses.

In the video, IK Ogbonna asked Erica Ngozi Nlewedim about the person that looks more fresh between the both of them. Erica responded saying, “I’m the one now, even a blind man knows I’m beautiful. I don’t need to argue it”.

When IK Ogbonna heard Erica’s statement, he giggled and said, “I’m sure your elites (fans) will definitely support you if I’m to ask them the same question. Well, I can’t argue, let’s leave it there”.

Erica Ngozi Nlewedim kept blushing in the video as she continue enjoying what she’s doing.

BBNaija: “Laycon Does Not Want You” – KiddWaya To Erica (Video)

#BBNaija: Diane Reveals What Kaduna People Did To Her