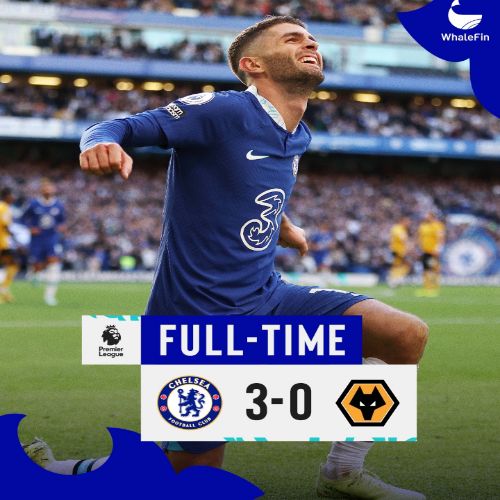 Three wins in a week for Graham Potter’s side, it’s been a great afternoon for them. Havertz, Pulisic and Broja with the goals, three players who would have been desperate for a goal too.

Graham Potter is looking to build momentum after recording his first Premier League win as Blues boss last time out, and will fancy his side’s chances against a managerless Wolves side who sit in the relegation zone following Bruno Lage’s sacking.

Chelsea will be without both N’Golo Kante and Wesley Fofana, though the former has returned to training, and have named a heavily-rotated side with Thiago Silva, Reece James, Raheem Sterling and Pierre-Emerick Aubameyang all dropping out of the side. Former Blues striker Diego Costa leads the line for Wolves, but Ruben Neves is suspended and Pedro Neto is out with injury.

Potter and his players will be feeling confident after brushing AC Milan aside in midweek and have a kind run of fixtures to come.

Sitting just four points off Tottenham and with a game in hand, another win today at Stamford Bridge will further boost the mood. Follow the game below with Standard Sport’s dedicated live blog.

Three wins in a week for Graham Potter’s side, it’s been a great afternoon for them.

Havertz, Pulisic and Broja with the goals, three players who would have been desperate for a goal too.

Broja opens his Chelsea account, brilliant finish to get up and running for the club. Chelsea fans absolutely love that.

Carney Chukwuemeka is making his debut for Chelsea after his £20million move. He made a great impact behind closed doors in the 2-1 win against Brighton scoring two goals.

He comes on for Gallagher who was arguably the man of the match.

Looks like Sterling and Aubameyang will be getting the afternoon off completely. Perfect outcome for Potter.

He’s able to bring Chukwuemeka on for his Chelsea debut for the final few minutes, with Ziyech also on. Havertz and Gallagher off.