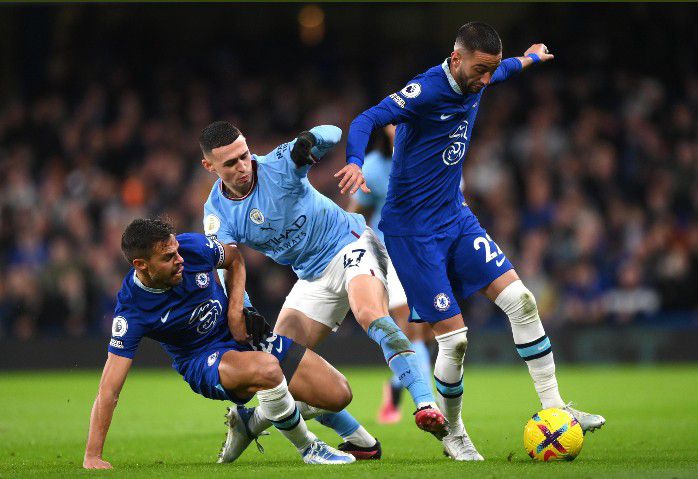 Pep Guardiola is deep in conversation with the brains trust on the bench, and it looks like they’re working out a way to change things up in the second half.

And it made need to come sooner as Chukwuemeka hits the post from the edge of the box!

A slight deflection takes the midfielder’s strike away from Ederson, but the Brazilian was beaten.

It’s actually very good defending from Stones who does well to get a block in.

Cucurella wins the ball high up the pitch and feeds Havertz. He finds Pulisic breaking into the box and the American’s attempted shot is brilliantly blocked by Stones.

There was plenty of concern ahead of kick-off that Man City could’ve run away with this game. But Chelsea have made a solid start at Stamford Bridge.

Christian Pulisic is down and in need of treatment. Was hit hard by John Stones in a challenge a few moments ago.

Credit to the visitors, they’ve patiently worked their way back into the game, but they’ll have to go even further if they’re to get a result.

Chelsea have been equal to everything the Cityzens have thrown at them thus far, but then again, the same is true at the other end of the pitch. Still no real fluidity from either side, though.

Raheem Sterling went down under an early challenge and has gone down again. Can’t be another injury, surely?